Ashton Olsen and The Pizzicato Strings 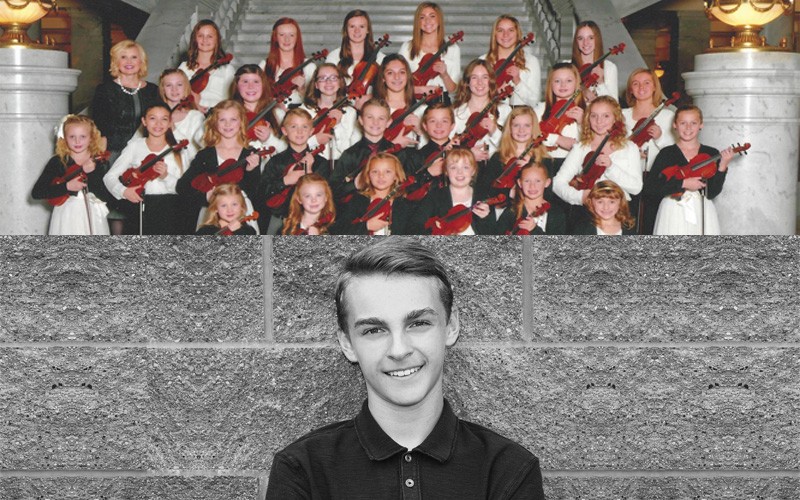 Pizzicato Strings & Company is a youth violin group from the Ogden area with ages ranging from 5-18.  The children learn and present two different programs each year.  Approximately twenty-five pieces are performed by memory.  In addition to the weekly performance class, the youth attend private lessons where an extensive classical repertoire is learned.

They have been featured artists at the Children’s Arts Festival in Taiwan, China, Festival of States in Washington, D.C. & Magic Music Days at Disneyland.  Local performances include pre-shows for the Utah Symphony, Ballet West & Michael Ballam.  They have been featured artists at the Utah Arts Festival for 18 consecutive years.  Pizzicato Strings was awarded the 2003 “Best of State” medal for best youth performing group.  Pizzicato Strings has recorded three cd’s.

Their director, Peggy Wheelwright, is a member of the Ballet West Orchestra, the concert master of both the New American Philharmonic and Chamber Orchestra Ogden.  She has been a soloist with the Utah Symphony, New American Philharmonic, Chamber Orchestra Ogden, Nevada Chamber Orchestra & Mormon Symphony.  Peggy has performed back up for several soloists including Natalie Cole, Sarah Brightman, Placido Domingo, John Denver, Led Zepplin, The Moody Blues, Manheim Steamroller as well as Marie Osmond and Kurt Bestor.  She has done extensive motion picture recording work.  Peggy has recorded two cd’s.

Ashton S. Olsen (in his own words):

My name is Ashton S. Olsen, and to make the very long story somewhat “short”, I love the piano. My love for the piano started just over one year ago, and ever since then my love for it has grown even greater. For me, there’s never a dull moment when I’m sitting in front of those eighty eight black and white keys; even practicing is fun for me. It all started just before Christmas of 2014. I had many interests, for example: cars, engineering, becoming an author, etc. However, I didn’t know what I should do for a living, so (being the religious man that I am) I prayed about it. I asked God to let me know what he wanted me to do with my life, and for some odd reason, I wanted to play the piano. I had never been even remotely interested in music, but for some reason, I became very interested in classical music, especially solo piano. I asked my mother for a piano for Christmas, and sure enough, on Christmas morning, I received a small electric keyboard. Two days later, after tinkering around with the piano, I was playing Fur Elise, by Beethoven (which, at the time, was my favorite piece for the piano). My family and friends were amazed (I even amazed myself). Now I’m a “virtuoso” pianist and composer, playing all sorts of pieces written by composers like Liszt, Chopin, Rachmaninoff, Beethoven, and even many pieces that I have composed. I love music, I believe that it is the universal language, because with music, I do not have to speak the same language as an individual in order to tell them a story.