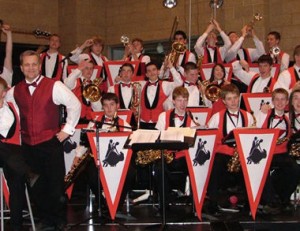 Glenn Miller, the man responsible for making big band swing music the most popular genre of the 1930’s, gave his life serving our country during World War II. In honor of him, one tradition of Moonlight Serenade is the recognition of those who have served our country. Each night a different veteran of a foreign war is honored for his or her contribution, followed by an Armed Forces medley that recognizes all in attendance who have served in the Armed Forces.

Music for Moonlight Serenade is provided by the Moonlight Orchestra (also known as the Davis High Jazz Ensemble) and Moonlight Singers. Director Steve Hendricks is in his 18th year with the program and in 2003 was recognized as the “Outstanding High School Educator” at the Utah Best in State Awards. He is listed in both Who’s Who Among American Teachers and Who’s Who in America.