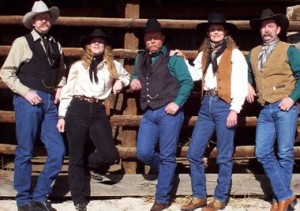 SaddleStrings is a true “cowboy” band, melding the styles of traditional trail songs and ballads of old with a contemporary flair while transporting the listener to a simpler time and place. Brian Arnold (Ogden) provides lead vocals and rhythm guitar, with Kurt & Cindy Argyle, (Hooper) on bass & vocals along with Laurie Morgan (vocals) and Bud Brown (Syracuse) on drums.

With all members having experienced the western cowboy lifestyle, they know about what they sing and do it from the heart. SaddleStrings has performed at festivals, fundraisers, assisted living centers and schools throughout Utah and Wyoming. They perform annually at a cattle rancher/ ranch lifestyle in Woodruff, Utah and have played on the Utah Performing Arts Tour in 1998-1999 at the Randall Jones Theater in Cedar City and the Union Station in Ogden. Other venues include the Rockin’ R Ranch outside of Oakley, Utah and at the Lakeside Lodge and Jacob’s Ranch in Island Park, Idaho.