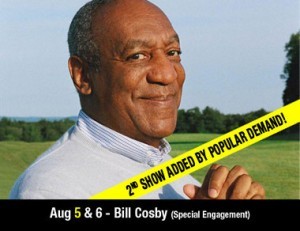 Due to popular demand and thanks to our wonderful sponsors, Alamexo Restaurant and Lifetime Products, Inc. we have added a second Bill Cosby show on August 5 at 8:00pm.

Bill Cosby is, by any standards, one of the most influential stars in America today. Whether it be through concert appearances or recordings, television or films, commercials or education, Bill Cosby has the ability to touch people’s lives. His humor often centers on the basic cornerstones of our existence, seeking to provide an insight into our roles as parents, children, family members, and men and women. Without resorting to gimmickry or lowbrow humor, Bill Cosby’s comedy has a point of reference and respect for the trappings and traditions of the great American humorists such as Mark Twain, Buster Keaton and Jonathan Winters.