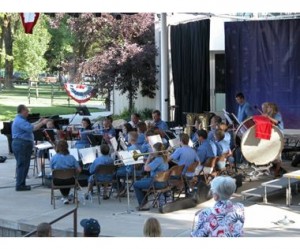 Layton Main Street Band was formed by Layton City Parks and Recreation in 2004 to support city events and to give talented musicians an outlet to express their talents. Since that time the band has performed for Layton City functions such as Veteran’s Day and the Liberty Days Parade, as well as the Davis Arts Sunday Concerts. The band has played at This is the Place State Park, Trapper Trails Council, Silver Beaver Colony, and for the Davis County Constitution Day program

The members of the band come from all walks of life and the musical experience the members share is long and varied. The group is under the direction of percussionist Richard Heath, band director at Central Davis Jr. High, where the band rehearses on Tuesdays at 6:45 p.m. in room 102. The Layton Main Street Band invites any interested musicians to join. For more information contact Mr. Heath at [email protected].

This year’s program will feature popular favorites and show tunes including The Wizard of Oz and the music of film composer John Williams.