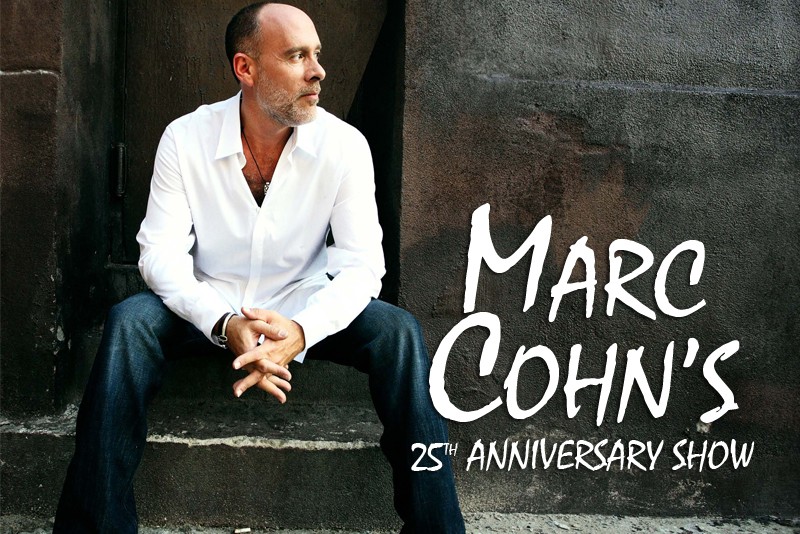 Marc Cohn is celebrating the 25th anniversary of his platinum-selling debut record with a series of very special concerts. Joined by an all-star band, Marc will be performing his Grammy-winning record in its entirety, from start to finish. From the iconic opening track “Walking In Memphis,” to the album closer “True Companion,” fans will hear a sequence of songs that have surely stood the test of time. Photographs and video from Marc’s personal archives will be shown, making this a singularly intimate concert experience.

After winning a GRAMMY for his soulful ballad “Walking in Memphis,” Marc Cohn solidified his place as one of this generation’s most compelling singer/songwriters, combining the precision of a brilliant tunesmith with the passion of a great soul man. He’s a natural storyteller, balancing the exuberant with the poignant, and able to distill universal truth out of his often romantic, drawn-from-life tales.
Cohn followed up his platinum-selling debut with two more releases in the 1990s, at which point TIME magazine called him “one of the honest, emotional voices we need in this decade” and Bonnie Raitt declared, “Marc is one of the most soulful, talented artists I know. I love his songs, he’s an incredible singer, and I marvel at his ability to mesmerize every audience he plays for.”

Raitt, James Taylor, David Crosby, Graham Nash and Patty Griffin all made guest appearances on Cohn’s early records for Atlanta, as his reputation as an artist and performer continued to grow. In 1998, Cohn took a decade-long sabbatical from recording, ending in 2007 with Join the Parade. Inspired by the horrific events following Hurricane Katrina and his own near fatal shooting just weeks before, Parade is his most moving and critically acclaimed record to date.

About his album Listening Booth: 1970, a collection of reimagined classics from that seminal year in music, Rolling Stone said, “Cohn has one of rock’s most soulful croons – a rich immediately recognizable tenor that makes these songs his own.” In late 2014, Cohn released, “The Coldest Corner in the World,” the title song to the documentary Tree Man and his first original song released in more than seven years.
On March 25, 2016, in celebration of the 25th anniversary of his platinum-selling debut album, Marc proudly released Careful What you Dream: Lost Songs and Rarities and the bonus album, Evolution of a Record, featuring never-before-heard songs and demos dating back to years before his debut album and the Grammy Award that followed.