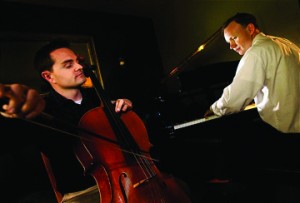 Steven Sharp Nelson’s unique “cello-percussion” technique combined with his emotional, passionate style has earned him a place in front of sold-out audiences around the world. He has recorded on over 100 different albums and performs over 100 shows every year. His solo albums Sacred Cello (2006), Tender Mercies (2008) and Christmas Cello (2010), have been among Billboard’s top 20 in the world, next to artists such as Yo Yo Ma. Steven has soloed and recorded with many professional performing ensembles, including a 2009 project with the China Philharmonic Orchestra entitled, “American Journey.” His arrangements and compositions have also received international acclaim—his most recent symphony, AFRICA, co-composed with Marshall McDonald, has been downloaded 38 million times since its 2008 premiere. Last year Steven donned the dubious rank of “Youtube star” via his collaborative work with Jon Schmidt, Love Story Meets Viva La Vida, which garnered millions of views and was among the top ten music videos on the web.

Marshall has developed a unique musical style that combines classical, inspirational, film score and new age genres of music all in one. He has recorded multiple albums, including his most recent compilation of arrangements inspired by Carl Bloch’s paintings of the life of Christ entitled, This is the Christ. Marshall’s film scores and symphonies have been performed and recorded across the globe, including by the China Philharmonic Orchestra. Marshall’s career has included opportunities ranging from performing as a hand double pianist for the lead actor in the WB Series, Everwood to performing his acclaimed arrangement of “If You Could Hie To Kolob” as a guest soloist with the Mormon Tabernacle Choir on its weekly broadcast of Music and the Spoken Word.

Marshall teaches full-time as an Institute teacher for the Church of Jesus Christ of Latter-day Saints and an adjunct music professor at Salt Lake Community College. He and his wife, Kristien, live in Riverton, Utah with their three children. Those who know Marshall will tell you that he is best known for his music, his smile, and his love of chocolate milk.