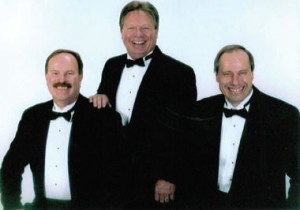 Feelings and memories are stirred no matter what your musical preference might be. The patriotic, semi-classical, rock-n-roll sounds of Sunshade ’n Rain will cause a nostalgic stir in your heart.

In 1971 Mel Teeples and Jeff Gregerson formed the group. Sunshade ’n Rain and toured extensively through the 70’s and 80’s. In 1974 Gary Romer formed a group called Change of Pace. Both performing groups were managed by Joseph Lake and Associates, with artist representation by George B. Hunt and Associates, Hollywood, CA and were touring and doing television spots simultaneously.

Sunshade ’n Rain and Change of Pace were similar in that their foundations were based on beautiful three-part harmony that enthralled and captivated audiences. The best of both groups came together to form the “new” Sunshade ’n Rain.

Now, the beautiful three-part harmony has transcended into a blend that can only be described as magical. Combining the musical and technical genius of Gary Romer with the powerful harmony of Gary, Jeff and Mel completes the inspiring package of Sunshade ’n Rain.

Sunshade ’n Rain is energetic, enthusiastic, thrilling, and gives a performance that lingers in the memory of the audience. Sunshade ‘n Rain’s love of the total musical experience shines through as they love their audience and their audience truly loves them.