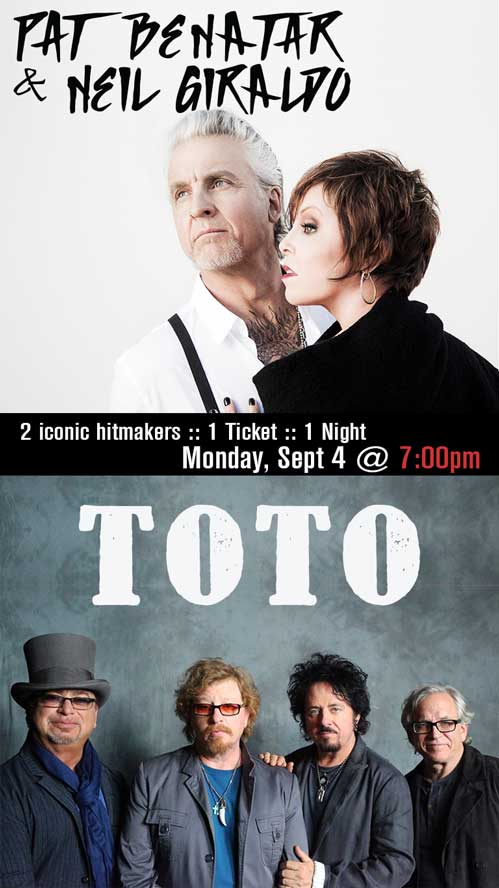 This will be an epic Labor Day! Pat Benatar has always been a rule-breaker and a trail-blazer, and remains a bold and distinctive artist both on stage and on record. Joining her will be her husband, Neil Giraldo, who has been a professional musician, producer, arranger and songwriter for over four decades. His innovative vision helped create the signature Benatar sound, from its inception.

With over 39 years together and thousands of credits and accolades to their names, TOTO remains one of the top selling touring and recording acts in the world. Historically, few ensembles in the history of recorded music have individually or collectively had a larger imprint on pop culture than the members of TOTO.

This show is co-sponsored by Cache Valley Bank

**This concert is a “Premiere Engagement” for the 2017 season and is not included in season subscriptions.

IMPORTANT TICKETING NOTE:  The Davis Arts Council can only guarantee tickets purchased directly through our box office. We cannot confirm any tickets purchased by any other method. Visit our FAQ page for information regarding The Kenley Amphitheater and our Summer Nights with the Stars season.

This show is co-sponsored by

Historically, few ensembles in the history of recorded music have individually or collectively had a larger imprint on pop culture than the members of TOTO.  As individuals, the band members’ performances can be heard on an astonishing 5000 albums that together amass a sales history of a HALF A BILLION albums.  Amongst these recordings, NARAS applauded the collected works with 225 Grammy nominations.  Band members were South Park characters, while Family Guy did an entire episode around one of their hits, and most recently Dax Shepard and Kristen Bell scored their honeymoon video to “Africa.”

As a band, TOTO has sold over 40 million albums, and today continue to be a worldwide arena draw staging standing room only events across the globe.  With over 39 years together and thousands of credits and accolades to their names, TOTO remains one of the top selling touring and recording acts in the world. They are the benchmark by which many artists base their sound and production, and they continue to transcend the standards set by the entire music community, being simply synonymous with musical credibility.  Their repertoire continues to be current via high profile usage on both broadcast television and in films.  They are pop culture, and are one of the few 70s bands that have endured the changing trends and styles to a career enjoy a multi-generational fan base.

It is not an exaggeration to estimate that 95% of the world’s population has heard a performance by a member of TOTO.  The list of those they individually collaborated with reads like a who’s who of Rock & Roll Hall of Famers, alongside the biggest names in music.  The band took a page from their heroes The Beatles playbook and created a collective that features multiple singers, songwriters, producers, and multi-instrumentalists.

In 2015, Toto released their first new studio album in ten years – TOTO IV. The album exhibited world-class musicianship, masterful arrangements, topical lyrical commentary, and melodies that the collective genius of Lukather, Paich, Porcaro, Williams and their assembled band-mates brought to life.  It debuted Top 10 in nine countries around the world and became their most successful album since 1988 in the U.S. and UK.

In 2016 they released the Blu-Ray/DVD title Live At Montreux which quickly charted around the globe as well. With the band’s 40th Anniversary coming up in 2018, TOTO has major plans in the works to celebrate their enduring career.

Pat Benatar: she’s always been a rule-breaker and a trail-blazer, she remains a bold and distinctive artist both on stage and on record, and now, after more than three decades in rock ‘n’ roll, she’s a bonafide living legend.

A four-time Grammy winner, Benatar is a classically trained mezzo-soprano. During the 1980s, Benatar had two RIAA-certified Multi-Platinum albums, five RIAA-certified Platinum albums, three RIAA-certified Gold albums and 19 Top 40 singles, including the Top 10 hits, “Hit Me With Your Best Shot“, “Love Is a Battlefield“, “We Belong“ and “Invincible“. During the early days of MTV Benatar was one of the most heavily played artists on the popular music channel. Her hits continue to be as unforgettable now as they were at the dawn of MTV, when Pat emerged, fearless, fighting and forging a path for other female rock stars around the world.

Born Patricia Andrzejewski in Brooklyn, New York and raised in Lindenhurst, Long Island, Pat started singing in elementary school and never stopped, working on her craft throughout her teens. At 19, after six months in college, she dropped out to marry her high school sweetheart Dennis Benatar, an army draftee who trained at Fort Jackson, South. The couple would eventually divorce, in 1979.

In 1973, Benatar quit her job as a bank teller to pursue a singing career full time after being inspired by a concert she saw in Richmond, VA. She got a gig singing with a local lounge band called Coxon’s Army, who soon became regulars at Sam Miller’s Café, in the historic Shockhoe Slip and well known in and around Richmond. In 1975, just as Coxon’s Army was about to break, and against the advice of everyone involved, Benatar quit the band. She packed everything she owned into her car and headed back to NYC alone, with only $2500.00 in her pocket. And she never looked back.

In 1978, in between appearances at Catch a Rising Star and recording commercial jingles for Pepsi Cola, Benatar headlined New York City’s Tramps nightclub, where her performance impressed representatives from several record companies. She was signed to Chrysalis Records by co-founder Terry Ellis. In the spring of 1979, producer and writer, Mike Chapman, introduced Benatar to Neil Giraldo, an up and coming guitarist. Giraldo began his career in 1978, as a key member of the Rick Derringer band, after beating out 200 other guitarists for the position. Chapman felt Benatar needed a musical director and partner who could establish a more aggressive sound and thought Giraldo was the perfect choice.  In Giraldo, Benatar found someone as strong as her, someone who could match the same fire-power, someone who could inspire her, while being inspired by her. Their connection was instantaneous…It was indeed, a perfect fit.

In the Heat of the Night, was recorded in June and July 1979. This was the first time the world was introduced to Giraldo and Benatar’s enduring partnership and their rock ‘n’ roll love affair. In The Heat Of The Night, which included the classic “Heartbreaker”, as well as the Giraldo-penned hit, “We Live For Love”, went platinum.

After being inducted into the Long Island Hall of Fame in 2008, Benatar released her long-awaited autobiography in 2010, the appropriately-titled Between a Heart and a Rock Place – which allowed the world a fascinating glimpse into the life and times of one of the most beloved female rock ‘n’ roll icons of all time.

Pat Benatar is acknowledged as the leading female rock vocalist of the ‘80s – a feat marked by her unprecedented winning of four consecutive Grammy Awards between 1980 and 1983, as well as three American Music Awards – but Benatar and Giraldo remain a rock ‘n’ roll powerhouse today, selling out concerts and still wowing audiences after over three decades in music together. Theirs is a chemistry that will, undoubtedly, be thrilling music-lovers forever.