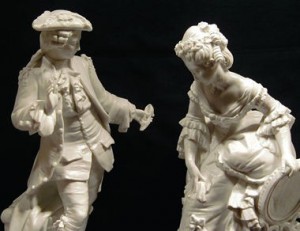 The True Story of Cinderella is a comic opera in one act with words and music by Warren Martin, professor of music at Westminster Choir College. It was first performed in 1955 as “May Day” entertainment by 13 graduate students at the college. The work was not published until 1984, after the death of the composer. “Cinderella” is not a staged work, but is sung in “oratorio style” with the singers in a row across the front of the stage, yet the music is anything but an oratorio, with a variety of musical styles, all “tongue-in-cheek.”.

Performing in the cast: Marianne Orton as Cinderella with Matt Shaw as the Prince. The King and Queen will be sung by Blaine and Lindsay Hickman. Beth Herman plays the Stepmother. Other cast members include Jason Herman, Katie Terry, Kip Nielsen, and Nathan Riddle.

The cast is under the musical direction of Kathy Skidmore who will also serve as pianist.